The Metroplitan Museum in New York recently opened a new exhibition entitled Another World Lies Beyond – Chinese Art and the Divine. Premodern China teemed with images of the divine. From the humblest printed image of the Stove God, hung in the kitchen, to the most lavish ritual painting created for a Buddhist monastery, people filled their world with objects that served as portals to realms beyond their own and to forces beyond their control. This exhibition presents a rich display of such images—mostly drawn from the Museum’s collection—ranging from serene, monochrome Buddhist paintings to raucous, colorful sculptures of popular deities. It runs from August 24, 2019 to January 5 in 2020.

The National Palace Museum in Taipei has some of the most wonderful painting by the ancient masters of ink painting. This is well known. It is not so well known that the collections keep expanding thanks to the generous support by different supporters. From May to September 25, 2019, the museum has a special exhibition of recent acquisitions of contemporary art. The image (it is  a detail of the whole scene) below shows a seascape, a wintry ocean in stormy weather, with hugh waves crashing into cliffs, foam and mist in the air. It is rather unusual but I quite liked it.

For those travelling in northern Italy in the autumn of 2017, the Venice Biennale has two sections where you can see a lot of chinese ink and landscape painting. In the Arsenale, the China country section presents a space where old and new ink painting techniques meet. One of the themes is waves – amateurs’ as well as professional treatments of the subject. Some colourful and in the folk-painting tradition, others almost abstract pure ink paintings. Across the water in the Arsenale, there is China Art Today that holds exhibit by several contemporary artists, paintings as well as video installations and sculptures. All of a very high quality and well worth a trip to Venice. 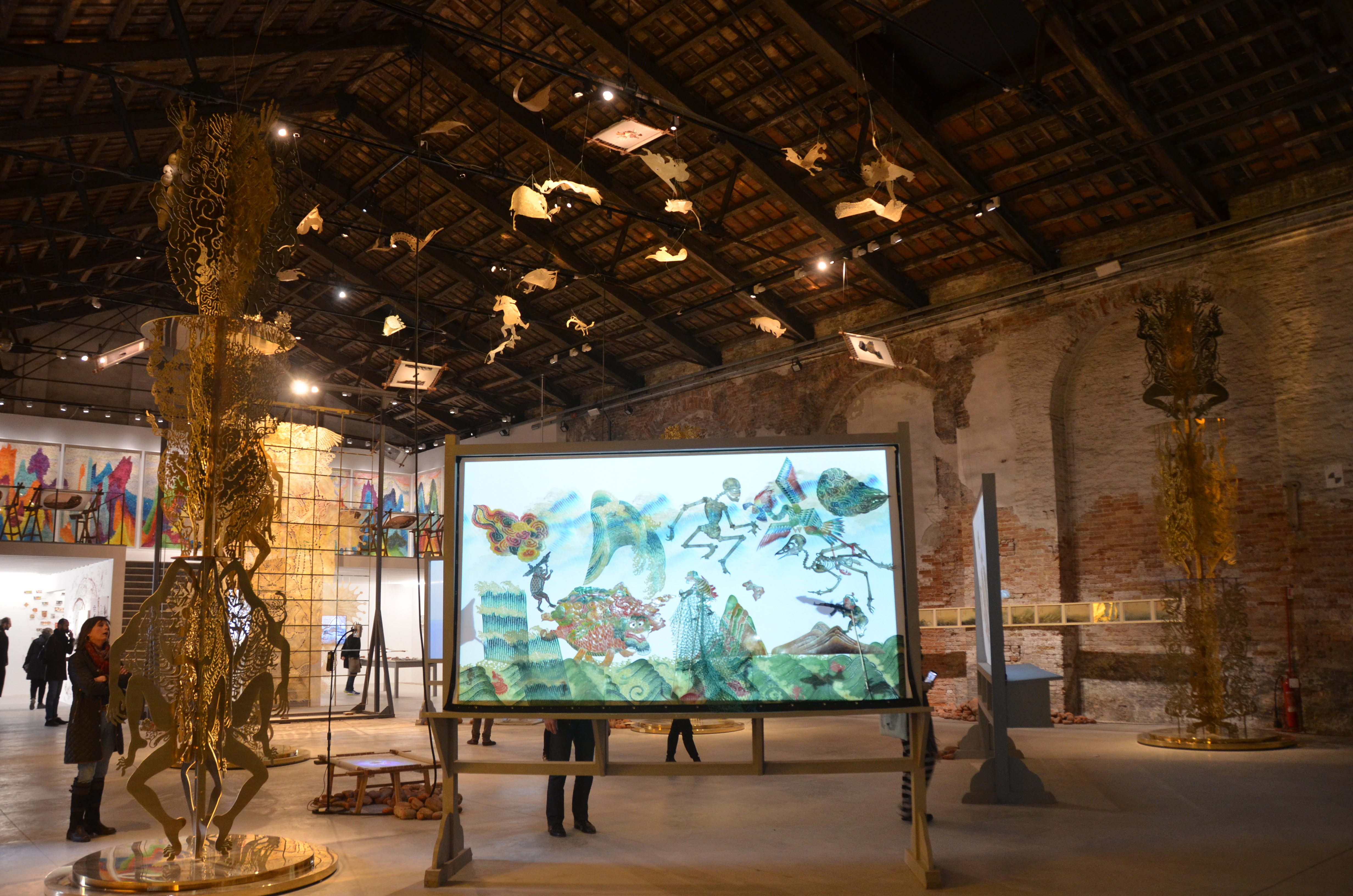 The Zhejiang Provincial Museum has a special exhibit of ‘Dwelling in the Fuchun Mountains’, the famous 14th century painting by Huang Gongwang (1269 – 1354). The subject has attracted other painters as well, and the exhibition shows how several other masters have tackled this famous view. Huang Gongwang began serious studies in painting only at the age of 50. In 1347, he moved to the Fuchun Mountains (southwest of Hangzhou) where he spent the last years of his life. There he made a number of paintings on the natural landscape, among them Dwelling in the Fuchun Mountains,. It was “carefully designed and developed in layers of wet washes and brush strokes, giving a convincing appearance of off hand but inspired organisation and of spontaneous ink-play in detail”. He presented it to a priest as a gift in 1350. A century later, the painting was somehow acquired by the another famous painter, Shen Zhou (1427–1509). He sent the painting to be inscribed, but the son of this calligrapher seized the painting which, after a few changes of hands, reemerged on the market being sold at a high price. Unable to afford the price, there was nothing Shen Zhou could do except to make a copy of the painting himself. This imitation by Shen Zhou has become the most well-known and acclaimed copy among all others. This is also on show at the Zhejiang Provincial Museum now, together with the original! Not long after he made the copy, Shen Zhou gave it to a friend named Fan Shunju. Fan began to search for the authentic copy. When he found it, he bought it at a hefty price and invited Shen Zhou to inscribe on it. Shen Zhou then noted down at the end of the scroll the story of how the painting was lost and found. The museum has had an interesting book on the history of the painting published, available in English as well.