Just as my aim was to present paintings under the previous heading, here I want to introduce different masters on the ink painting tradition. I start with:

Born in  1899 and living until 1983 he is one of the best-known Chinese artists of the twentieth century. Originally known as a traditional painter, by the 1960s he turned to impressionist and expressionist modes of expression. In addition, he is regarded as one of the most gifted master forgers.

Zhang was born in the Sichuan Province into a poor but artistic family. His first commission came at age 12, when a traveling fortune-teller asked that he paint her a new set of divining cards. At age 17 he was captured by bandits while returning home from boarding school in Chongqing. When the bandit chief ordered him to write a letter home demanding a ransom, he was so impressed by the boy’s calligraphy that he made him his personal secretary. During the more than three months that he was held captive, he read books of poetry which the bandits had looted from raided homes. Quite an interesting summer vacation for a young boy!

Later on he moved to Japan to learn textile dyeing techniques – his family planned a business future for him. In Japan he learnt about paper qualities, minerals and dying techniques. After returning to China he started a successful career selling his own paintings – and also forgeries of old masters. Interestingly, his skills in that has not stained his reputation. 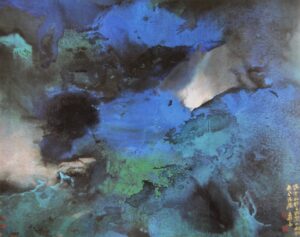 The paintings here show how he has developed the blue and green landscape painting techniques from the Tang dynasty. The painting above is entitled Approaching storm in the mountains, and the one below depicts the Mighty Mount Lu (it is actually a detail of the painting with that title). Zhang would fasten the paper to a board and then pour rather apply the ink and colour with brush. Tilting the paper back and forth, he would let the different colours mix and merge until he reached the desired effects. Details of landscapes would then be added once the dramatic expressionist sections were ready. 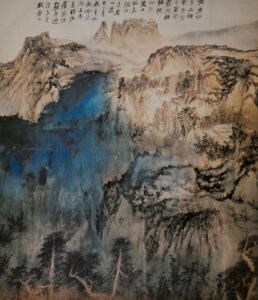