Many have tried to give instructions on this subject and I cannot add much here. But I would like to point those who have not already studied it towards the Mustardseed Garden Manual of Painting. It was written, or compiled rather, in the late 17th century and remains the most influential source of instructions on the art of ink painting. It is constantly reprinted and there are also films on youtube to show how to do it.

The spirit of the Mustardseed Garden is well captured in the quote here, which I found under a heading entitled ‘How to avoid being banal’ (and who does not want to avoid that!). The advice is:

When you paint it is better to be inexperienced than to be stupid. It is better to be audacious than to be commonplace. If you hesitate with the brush you cannot bring life to your painting, and that which is painted according to convention will probably appear banal. If you want to avoid being banal there is no other way than to study hard so you can give expression to qi – the force of life. If the commonplace and vulgar is allowed to dominate, qi disappears. The beginner should be hopeful, inquisitive and careful so that qi is present and increasing.

This is good advice, but perhaps not quite obvious how to do. I would like to call attention to the three building blocks of an image; the brushstroke, the dots, and the washes.

The single brushstroke is the most important element in painting and there are many such strokes that are named and that need to be practiced. The two images here convey a sense of how beautiful and varied strokes can be. 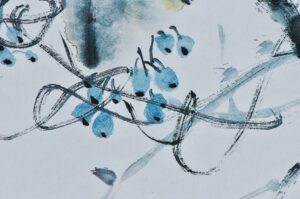 Dots may seem insignificant but are also important elements in painting, sometimes they make up the major part of the image. Dots are the building blocks that create patterns and invokes a sense of distance. The two images here show how paintings can be almost completely composed by dots. 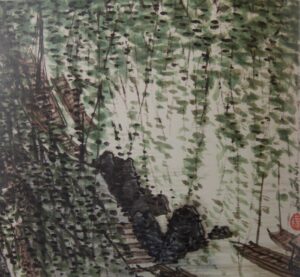 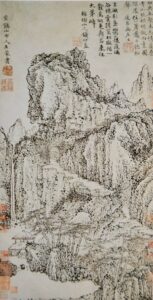 Washes cover large areas of the image with ink and colour. A green wash transforms the side of a mountain outlined in ink to verdant pastures – or an ochre wash transforms it to windswept sandstone. An indigo wash above snowy mountains creates the image of a darkening winter afternoon. And so on ….. The image below show how washes create leaves, dots shape the fruits, and the stems of the grapevine are created by vigorous brushstrokes. 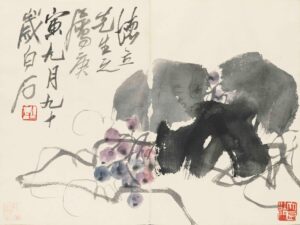